By BigDaddyDecember 16, 2019Dance
No Comments 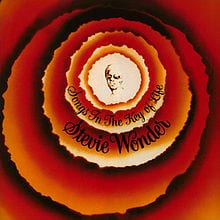 Stevie Wonder released his best-selling album, “Songs in the Key of Life,” in 1976. He jammed 21 songs into the album which explored a wide variety of musical genres. One track from the album, “As,” is a popular wedding song. In fact, The Knot lists it #2  on their list of classic first dance songs.

As around the sun the earth know she’s revolving

And the rose buds know to bloom in early May

You can rest your mind assure

That I’ll be loving you always.

“As” was an international hit.

‘As’ is the case with any great song, “As” has been covered by a unique mix of artists. Sister Sledge immediately covered the song just a year after Wonder released the song. Listen to their soulful interpretation:

George Michael and Mary Blige had a bigger hit

George Michael and Mary Blige released their cover of “As” in 1999 that was actually a bigger hit in Great Britain than Wonder had with the song. Watch this lively music video of their version:

“Songs in the Key of Life” reached #1 on the Billboard charts for thirteen consecutive weeks, a massive hit! The Grammy Awards honored it as the album of the year. Rolling Stone magazine ranked it as #57 on their list of the 500 Greatest Albums of All Time.

As good a song as ‘As’ is, four other singles from the same album outsold it, including:

I Wish (#1 on the Pop and Black Singles Lists)

Sir Duke (#1 on the Pop and Black Singles Lists)

So the question is: which version is right for your first dance? Regardless of the song or the artist, that’s where Big Daddy Walker Productions makes a difference. We can play the version of your special song that you love most.

A proper wedding celebration requires customization, because each romance is unique. We’ll help you plan custom entertainment with client planning tools that make the entire process AS easy as dancing to your favorite song!